I've been developing for KDE for quite a while now, so I figured I should start blogging about what I'm up to. This being my first post I think it's best I introduce myself and write about what I have been able to achieve so far.

My name is Sebastian Gottfried, I'm currently studying Computer Science and in November 2011 I've started hacking on KTouch. My main incentive was to learn and master new technologies, this time my main interest was Qt Quick. Why did I choose this project in particular? First I gained much personal profit from this application as I've successfully learned touch typing with it. Secondly the application was basically unmaintained and in a state deserving a facelift. Being a game-like application of some sort Qt Quick seemed to be the obvious choice to tackle such a task. Lastly I thought rewriting KTouch's user interface was a big enough task to actually learn something and small enough to remain achievable.

Well, ten months later my code is still not in a releasable state. Maybe I underestimated a bit the amount of work necessary, but there is continuous progress and the current plan is to release this new version with KDE SC 4.10. For the time being, here's a screenshot documenting the current state of my version. 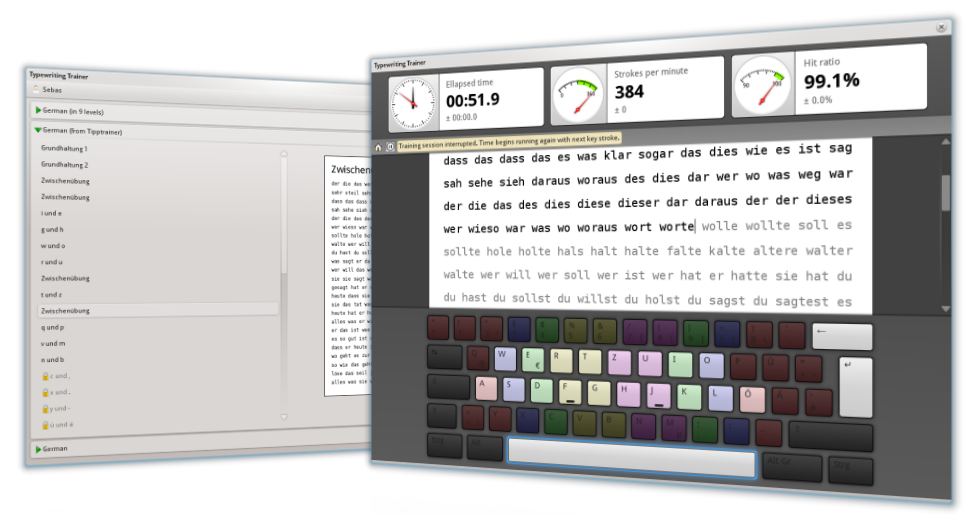 As one can see the difference to the currently released version of KTouch is quite dramatic. I will write about the new features and my plans in more detail in future posts. If anyone wants to try it out: the code lives in KTouch's Git repository in the branch next.

The State of KTouch — Part I